OK, It’s more fun and more challenging now, although I’m not sure anyone would buy it, even if I polished it.

It was way too easy, so I took a cue from @ OwenGoss’s Dapple and put in a color mixing element. 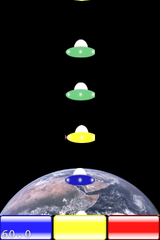 So if you want to block the green aliens, you have to hit the Blue and Yellow buttons at the same time while the green spacecraft enters the atmosphere.

I tried a bit to get a video, but multi-touch in the simulator is way too hard, I have no idea how long it would take to get iSimulate working (I’m running on XCode 3.2.[REDACTED], iOS 4.[REDACTED]GM), or even if it would work at all, so you’ll just have to take my word for it.

The good news is, with only a dozen or so of us left, the Internet only feels like 56K dialup.

So now, I’m into the part of game design that throws me: the balancing (for lack of a better word).

There are some games that, when you fail, make you want to throw the controller at the wall and give up in frustration. There are other games that, when you fail, make you think to yourself “I was SOOOO close”. While which games fall into which categories vary from player to player, a lot of designers seem to get it right a high percentage of the time.

I’m not one of those designers :).

So I’m going to think about what I want to do for carrot/stick (e.g. points/achievements and game over). I don’t have an initial guess because, honestly, I didn’t think I’d get far enough tonight that I’d need to worry about it, so I hadn’t even thought about it.

The amazing thing is that I’ve gotten this far, especially since I have mostly not had good enough connectivity to do google searches. I’ve had the beta draft of the Apress cocos2d book, the Doxygen output for the cocos2d-iphone repo (and of course, the repo’s source code), and Tom Frauenhofer’s example project from yesterdayMonday morning. That this even feels like it might be a game is a tribute to the ease of use of cocos2d and how good Tom’s class was.